Naturally, our first question is how did you get into mori girl?

Maybe about four years ago I was really into j-culture and j-fashion. I heard about Mori girl during the time but I was more inspired by decora style. I became uninterested after that year I believe, but this year I started to like Lolita style when I saw the Lolita club in my city at a meet-up. Even though I don’t have any lolita clothing yet, I joined while I’ve been researching different style. I stumbled across Mori again and became intrigued by the fantasy style!

Who is/are your mori girl idols? who inspires your fashion?

Fairy Emily (fairy-emily.blogspot.com) is one of my main mori girl "idols." Her style is more of the cute and pretty mori and also incorporates lolia into her fashion. What I like about her is that she also leads a mori and lolita-esque lifestyle. She uses natural lighting in her pictures, does photoshoots with her husband outside in the forests and gardens, and has such a lovely home.

I also admire GoHálainn (gohailainn.net) because her outfits are closer to the traditional mori style and I look to her to see what kinds of pieces I should be getting as I start my mori collection.

Lastly, is also a model I don’t know the name of, but I’ve seen her frequently in many photoshoots and find her style and appearance to be very enchanting, almost daydream-like. In my opinion, she’s more of the legitimate forest girl. Very rural and magical. 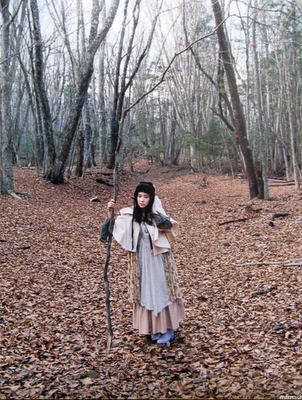